Alopecia is thinning of hair which might be temporary or permanent based on etiology. Androgenetic alopecia is a type of patterned baldness which can happen in both men & women.

A variety of genetic and environmental factors play a role in androgenetic alopecia. This form of hair loss is due to male hormone (androgen/testosterone). Testosterone hormone gets converted to active male hormone called 5 Dihydrotestoserone (5 DHT) in the skin & hair by an enzyme called 5 alpha reductase. In men & women who are carrying the genes of AGA, hair stops growing, reduces in size, falls off after maturity due to increase in 5 DHT in their scalp hair roots, in a classic pattern.

3.How does it appear?

In men , hair loss is seen first as “M” shaped and it gradually progresses to become 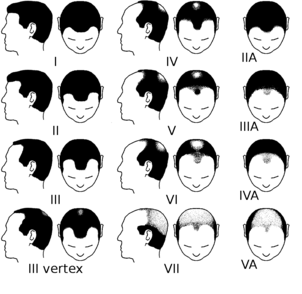 a “U” shaped baldness.

While in women, its seen as gradual thinning of hair over the top of the scalp

4.When does it usually appear ?

In men, recession of hair line can start as early as late teen years, however the condition might not progress at all or might progress very slowly during their 20s & 30s. In women, the similar thinning is usually seen after the age of 40.Nowadays, the features of baldness can appear in both genders as early as in early 20s or even late teen years. In women, the progression can be due to a coexisting condition PCOS, in which excess of androgens in the body cause hirsutism(hair growth on face),irregular periods, adult acne & other hormonal issues.

Treatment can vary according to the stage of baldness & patient’s desired results.

• Minoxidil (in varying percentages) is the standard FDA approved treatment used all over the world for treating AGA in both men & women. It helps in slowing down hair fall, regrowth of hair follicles which had previously fallen.In first 4 months of treatment, vellus hair growth constitutes much of the total hair regrowth. Thereafter, terminal hair growth becomes noticeable.

• Peptides: Although the role not significantly proven, the peptides are newer & widely accepted treatment option, available for AGA.

Obtained from the patient’s blood, the platelets & growth factors in the plasma facilitate cell growth and rejuvenate hair follicles thus improving on their capability for hair regrowth.

Similar to PRP, mesotherapy uses a ready made cocktail of growth factors & peptides which when injected or infused into the scalp, lead to hair growth .

The hair are harvested as a single strip of skin or as single hair follicles which then are implanted to the front of scalp. The results are natural and hair grow normally .

These are temporary options which can provide to cover up the bald areas over the scalp.